Imagine there’s no countries
It isn’t hard to do
Nothing to kill or die for
And no religion, too
Imagine all the people
Living life in peace.

Last week my wife Julia, our daughter Caroline and I flew to San Jose, Costa Rica for a 8 day tour of this beautiful country with Caravan Tours.  I am not much for guided tours, but we heard good things about Caravan and thought it would be a great way to introduce ourselves to Costa Rica.  On the tour bus heading to our first stop at the Poras Volcano National Park, I chatted with a tour participant about Costa Rica.  I said that we heard that Costa Rica is a tropical paradise, a stable democracy, educated, and relatively affluent for a Central American Country.  She said YES, this place is UTOPIA!   Utopia–hmm, the last time I thought about Utopia was back in the sixties (which for me was really the seventies) when “Give Peace a Chance” was a mantra for a anti-establishment generation fed up with wars in Southeast Asia.  Many  of us focused our attention on finding a more perfect green, and peaceful world only to later to be co-opted into a me generation more focused on career growth and the trappings of rising affluence and status.  Utopia, lets hold that thought while I introduce the first stop along our tour!

I feel lucky that during our brief visit to Poas National Park that we were able hike through the cloud forest and see the Poas Volcano Crater and Lake. The Volcano and Lake are only visible about 30% of the time, so one is throwing the dice with a brief visit. Poas has erupted 39 times in the last two centuries and is a very active volcano. The crater is over 8,000 feet in elevation.

Costa Rica is one of the most progressive nations on earth when it comes to protecting its wild areas with over 30% of the nation consisting of National Parks. By way of contrast the US is about 14% with much of that land in Alaska. Everywhere I went in Costa Rica it was evident the Government and People were going through great lengths to protect the natural environments and endangered species.  Costa Rica was twice ranked the best performing country in the New Economic Foundation’s (NEF) Happy Planet Index, which measures environmental sustainability, and was identified by the NEF as the greenest country in the world.  Costa Rica officially plans to become a carbon neautral country by 2021.  So Costa Rica, while perhaps not exactly Utopia, ranks high as a country that has gone farther than others in taking steps to ensure environmental sustainability, protection of natural beauty and habitat, and reducing its environmental footprint.

After the Poas Volcano we headed toward Fortuna and the home of another beautiful Volcano, Arenal.  Along the way we stopped a beautiful church, the  Iglesia de San Rafael, located in the mountain village of Zarcero, Alajuela.  I just loved the effect of the afternoon light coming in through the stained glass windows.  This church and many others that dot the countryside also serve as a reminder that this nation is overwhelmingly Roman Catholic, a unifying cultural influence.  If this place is Utopia, religion still has a strong role in the lives of the people. 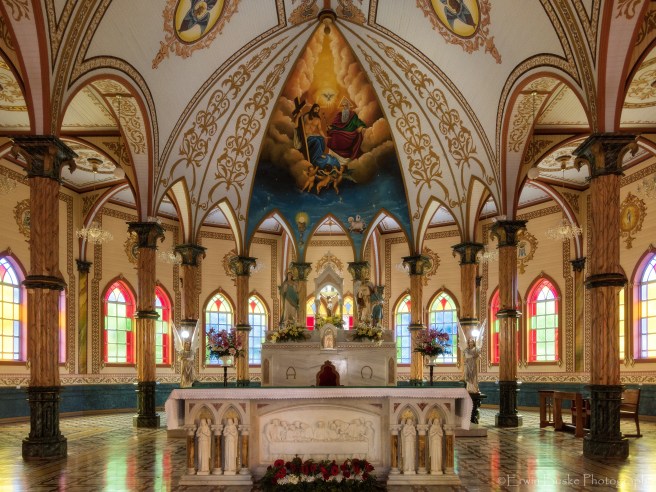 Along the way we also passed through coffee, banana, guava, and pinapple plantations-a reminder that although tourism plays an important role in the Costa Rica economy, so does agriculture.  Increasingly, however, Costa Rica uses immigrant labor from Nicaragua to harvest their crops, as the pay is not adequate for most Costa Rican’s who have grown accustomed to the highest standard of living in Central America. 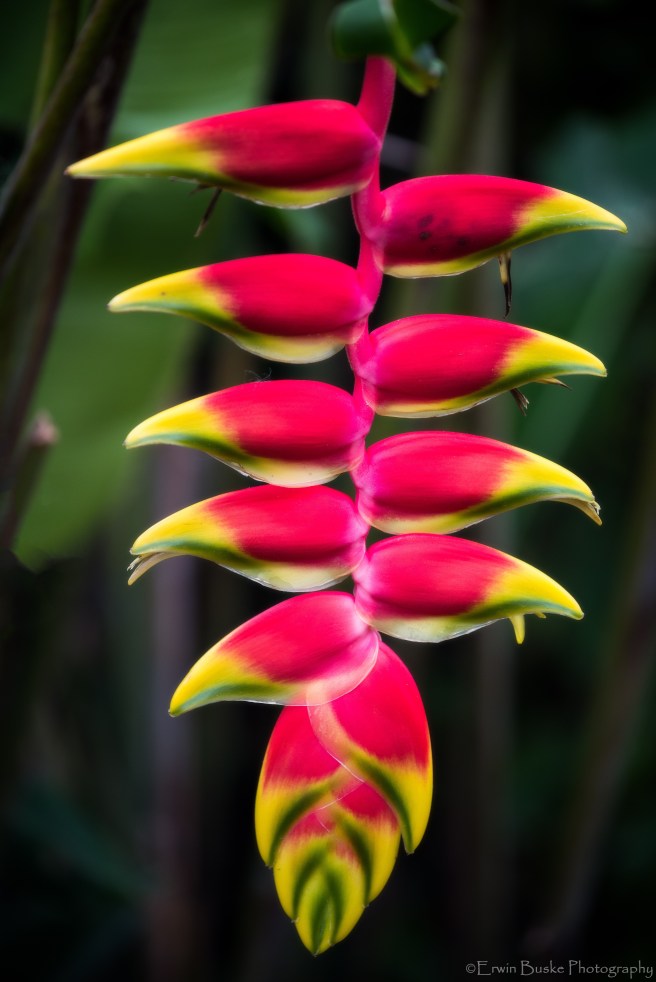 Our next stop and home for two nights was our hotel in Fortuna, located right at the base of the Arenal Volcano National Park. 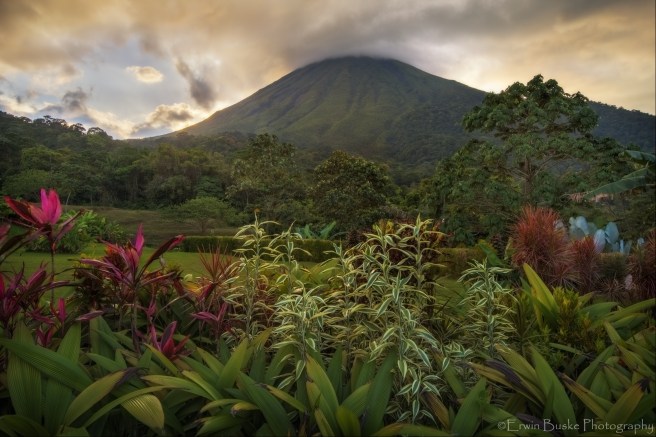 Arenal is one of seven historically active Costa Rican volcanoes along with Poás, Irazú, Miravalles, Orosí, Rincón de la Vieja , and Turrialba and is considered one of the ten most active volcanoes in the world. It has been studied by seismologists for many years.The volcano is located at the center of Arenal Volcano National Park in the northern part of the country.  In 1968 it erupted unexpectedly, destroying the small town of Tabacón.  This serves as a reminder that although in certain conditions this country looks beautiful, calm and peaceful, there are explosive volcanic and potentially destructive forces lurking underneath the ground that at anytime can erupt and change forever the landscape as we know it.

The next day we were back on the bus for a field trip to a Rio Frio river cruise through the Costa Rican jungle and the Cano Negro Wildlife Refuge, way up north toward the Nicaraguan border.  Along the way our tour guide Rebecca informed us that Costa Rica is a nation without an Army.  In 1948, Jose Figueres, then president of Costa Rica, made a fiery and eloquent speech, after which he took a sledgehammer and bashed a hole in a huge stone wall at the nation’s military headquarters, Cuartel Bellavista. Its imposing towers and massive gates had loomed over the capital city of San Jose since 1917, the country’s premier symbol of military power and the home of the “Tico” military establishment.

Figueres was not just being a showman; he was announcing something truly extraordinary: Henceforth, Costa Rica would take the almost unheard-of step of renouncing its military. At the conclusion of the ceremony, he publicly handed the keys to the minister of education, announcing that Bellavista would be transformed into a national art museum and the nation’s military budget would be redirected toward healthcare, education and environmental protection.

Figueres was painfully aware that Costa Rica’s military, like that of other Central American states, had been used to suppress domestic uprisings and undertake coups, especially against governments perceived to be left-leaning like his (even if they were actually more middle of the road).  Eliminating the military would also eliminate the possibility of military coups.  But how does a country surrounded by unstable neighbors protect its borders without a military?.  Somehow Costa Rica has managed.  When Nicaragua made a territorial claim to a Costa Rican island on the Carribean side of the nation, kicked out the Costa Rican residents, and built a military airport things got testy. But a simple meeting at a San Jose hotel conference center between Daniel Ortega of Nicaragua, the President of Costa Rica and Obama was enough to diffuse this crisis. Nicaragua gave up its claim and Costa Rica gained a new airfield.  I kept thinking to myself that if more nations eliminated their military the world would be a much more peaceful place and once again I started dreaming of utopia.  The Utopian vision may never be fully reachable, but it is a vision that can help guide us to a more evolved world with fewer if any military engagements.  Realistically this may not be possible for superpowers like the USA, but it is certainly possible for the nations of Central America, and without exception they would be better off.

Time to awaken from this Utopian dream and get back to reality.  We are on the river cruise through the jungle and we come to the banks of the Rio Frio River where there is a group of White Face Monkeys.

This Alpha Male White Face Monkey separated himself from a pack of monkeys playing on the river bank. He walked out on small tree branches close to our boat, aggressively started banging branches toward our boat and making loud noises signaling for us to go away. The captain only staid here a few brief moments, during which time I was able to capture this shot.

The next day we enjoyed fresh Costa Rican coffee at sunrise and headed out to the JW Marrior Resort at Guanacasste Beach along the Pacific Ocean.  We felt blessed to see the volcano in full view as the chance of seeing this is no greater than about 30%. 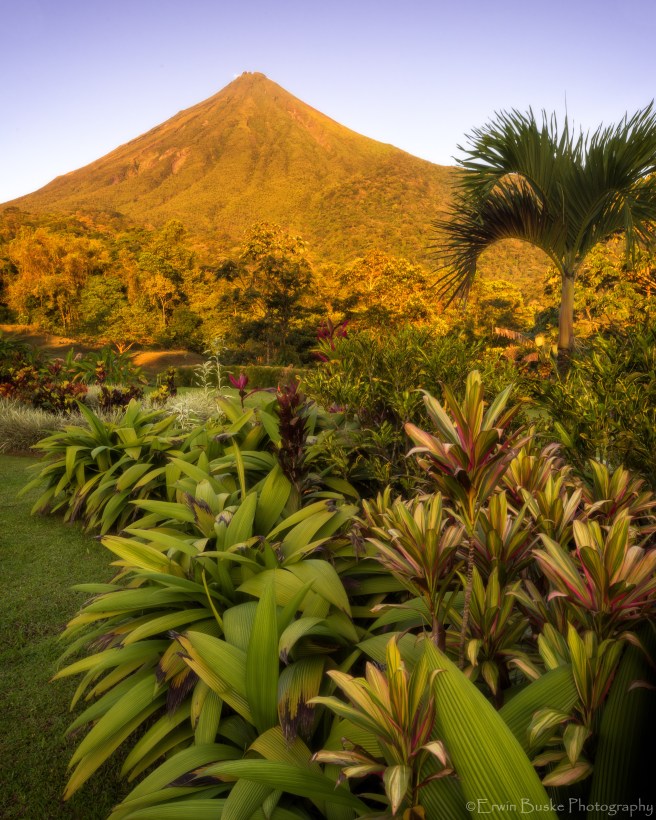 Guanacaste Beach is located along the Pacific Ocean in an area that a lot of Americans have chosen as their new home in retirement. Although attractive, this dry and hot area would not be my first choice and I preferred the cooler jungle areas around the Arenal and Poras Volcano’s. I can understand the attraction, however, for the scores of American Baby Boomers who call or are planning to call Costa Rica their new home.  They can find their piece of near Utopian beach paradise for a fraction of the cost of places such as California, Florida and Hawaii.

After leaving Guanacaste Beach we headed south toward Panama for another jungle cruise and a chance to see crocodiles in the wild along the Tarcoles River.

This Croc is patiently waiting for his lunch. How would you like to be the dental hygenist responsible for cleaning this guy’s teeth?!  While Costa Rica may be as close to Utopia as one can get here on earth, there is danger lurking in the waters of the rivers, and I would not recommend swimming!

Nest up on our tour and final destination is the San Bada Hotel just steps away from Manuel Antonio National Park. 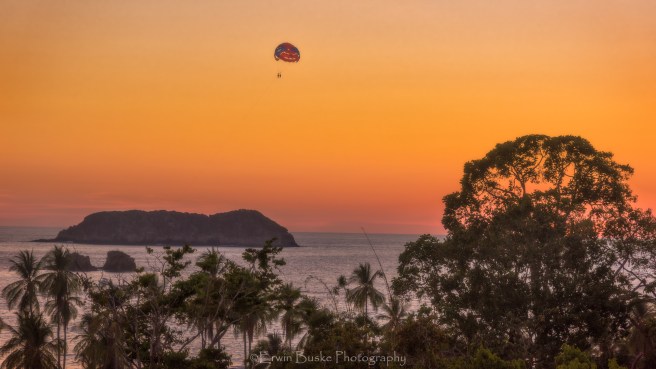 Floating Free as a Bird

Here is a sunset view from the roof top of the San Bada Hotel, where we just arrived after a long drive and were in desperate need of refreshment. This also just happened to be happy hour with unlimited complementary Pina Coladas! How would you like to be the paraglider gliding through this scene?

So back to our opening question: is Costa Rica utopia?  Well after an eight day tour through the country and doing some of my own research, I would say not.  There is still crime in this country and also there is a significant number of people are living close to the poverty line. But the nation is blessed with a climate, natural beauty, culture and government that has brought the country closer to the Utopian vision than just about any other place on earth. For a young Costa Rican coming of age, I am certain that it is comforting to know that their nation has undertaken the right decisions to ensure that they are not only prosperous now but also that the beautiful environment in which they live is sustainable not only for the immediate future but also for future generations.  It is also comforting for them to know that their nation’s resources are not being used to support a military that historically has worked against the evolutionary development of the nation, but instead these resources have been directed toward education and the well being of its  citizens.

Thanks everyone for taking time to read this blog.  Your comments and feedback are always greatly appreciated!  Thanks again for looking!